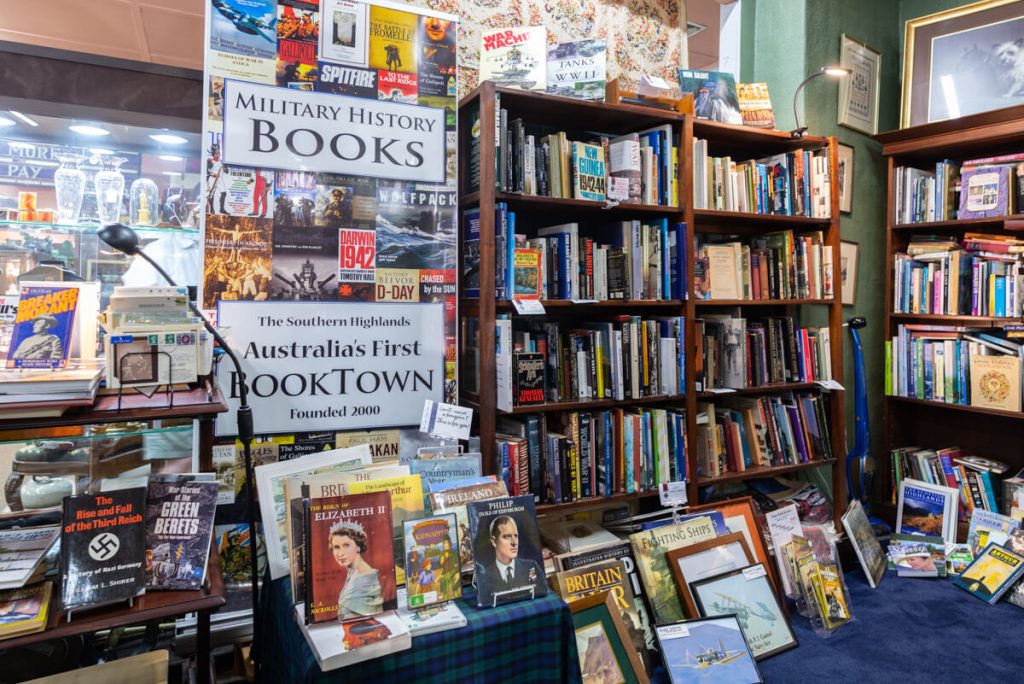 A "knighthood" was bestowed on its President, "Sir" Garry Barnsley OAM

To mark World Book Day (10 March), the public announcement of the intention to develop Australia’s first booktown, was made by the Convenor of Booktown Australia, Paul McShane. To acknowledge the early and enthusiastic support of the Southern Highlands Business Chamber, a “knighthood” was bestowed on its President, “Sir” Garry Barnsley OAM. In a presentation witnessed by Wingecarribee Shire Mayor, Dr. Sara Murray, Paul McShane presented the scroll granting the title with the personal seal and signature of King Richard Booth of Hay, self-declared monarch of the world’s first booktown, Hay-on-Wye.

The international booktown movement may find its first Australian location in the Southern Highlands if the early enthusiastic support of both booksellers and many members of the local community is anything to go by.

Announcing the Southern Highlands proposal to coincide with World Book Day on 10 March*, the project’s Convenor, Paul McShane, said that Australia was the last continent to see the international booktown movement reach its shores but that this could ultimately prove to be an advantage.

“The international booktown movement grew out of the phenomenal success of Hay-on-Wye, which up until the 1960s was a tiny market village on the English-Welsh border suffering from the slow economic decline that was, and continues to be, typical of many rural towns” said Mr McShane.

“Hay’s transformation into a retail and tourist phenomenon that has achieved worldwide fame began when an eccentric entrepreneur, Richard Booth, opened a series of bookshops, including one in the old castle complex at the centre of the town. Other booksellers followed his lead and today there are more than 30 bookshops in the district attracting between 500,000 and one million visitors annually.

“Booth’s efforts were spurned by tourism authorities and local government and yet his instincts and vision quickly proved them wrong. The opposition to his booktown concept for Hay eventually led him to declare “Home Rule for Hay” on April 1st 1977 and he promptly appointed himself “King”. The stunt worked and Hay and its maverick royal personage achieved even greater fame throughout the world.”

“Over the last two decades, an international booktown movement has been inspired by Hay-on-Wye’s original example. Over 20 booktowns have either been established or proposed in Europe, Asia and the Americas but despite some suggestions for Australia nothing much has resulted [See separate story by Paul McShane]

“I have been monitoring the growth of the international booktown movement for several years now and corresponding with the various booktowns as well as academics who are studying them closely.”

“Ever since moving to the Highlands and commencing our business, the possibility of starting a booktown in Australia has intrigued me, but particularly the prospect of doing so in this district with its many splendid booksellers,” said McShane.

Booktown Australia Convenor, Paul McShane is also the owner, together with his partner and wife, Sue, of the out-of-print booksearch service, BiblioQuest International, which is based in Bowral.

The Southern Highlands has many other existing links to bookselling and publishing to offer a would-be booktown, together with a rich history of literary links [see separate story by Garry Barnsley].

It was during a business meeting in January with his solicitor, Garry Barnsley, that the mutual interest in promoting the Southern Highlands as a booktown emerged with Garry having also independently identified the promotional potential of bookselling for the region.

The Southern Highlands Business Chamber, of which Mr Barnsley is President, has formally endorsed the booktown project as worthy of further support and investigation.

“The Southern Highlands is an ideal location for Australia’s first booktown and is the kind of retail and tourism development that promotes the region in both a clever and constructive way,” said Mr Barnsley.

“The Business Chamber’s role is to champion and support commercial initiatives for the benefit of the local economy and the community so it is happy to assist the proposal get off the ground,” he said.

Similarly, Wingecarribee Shire Mayor, Dr Sara Murray, has expressed her strong interest in the project and offered her personal support after receiving a briefing on the international booktown movement.

“It is early days for this project and it is not clear what support Council itself might consider but I want to personally encourage the idea further,” said Councillor Murray.

“As we attempt to achieve a university campus for the district, I believe this proposal fits well with the high value that residents and visitors place on our educational and cultural assets,” she concluded”

BookTown Australia has been established to promote the international booktown movement in this country and provide networking and promotional support. Convenor, Paul McShane, believes that Australia may eventually be host to three or four booktowns in various states but is keen to see the Southern Highlands lead the way.

BookTown Australia’s web site is https://www.booktown.com.au or you can telephone Freecall 1800 067 877 and ask to be placed on the free booktown newsletter mailing list if you or your organisation are interested in being involved in the booktown movement. The web site and newsletter includes a directory of booksellers and literary connections for the Southern Highlands as well as hyperlinks to other booktowns around the world.

Once the level of public interest in the project has been established, further discussions and meetings will be held among the district’s booksellers to determine how best to advance the Southern Highlands proposal.

* Editors Note: Like the international booktown movement, World Book Day is little known in Australia but has been designated by UNESCO as a worldwide celebration of books and reading and was marked in 30 countries around the globe last year. For example, in the UK and Ireland every schoolchild is to receive a World Book Day Token and has so for the past three years. Usually World Book Day falls on 23rd April but because that date coincided this year with Easter many countries have moved it to 10th March for 2000 only.

The booksellers and publishers located in the Southern Highlands include the following:

PrevPreviousOne Book – One Town Community Reading Campaign
NextThe birth of the book in Terra Australis, 1802-2002Next 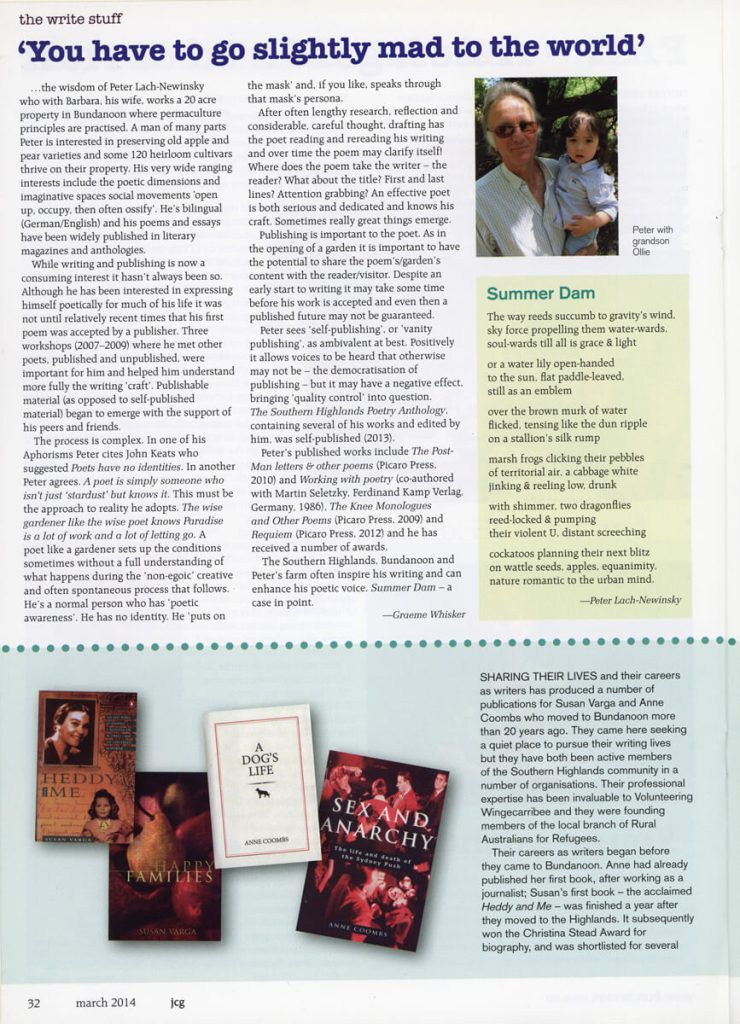 ‘You have to go slightly mad to the world’

There’s something about Mary in Holly Street 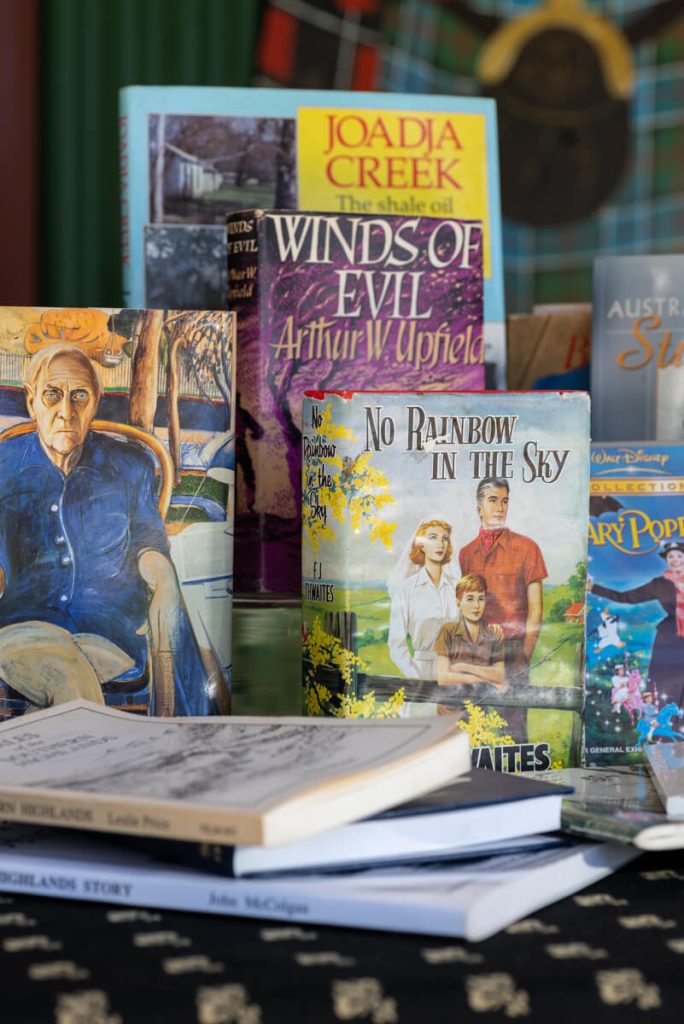